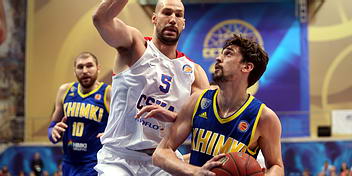 "CSKA started terrific and pushed the tempo, which is why they got the 20-point lead. We had tough time and it was never really a game. I tried to use different player combinations, but it’s clear CSKA is one of the best teams in Europe. They have a lot of smart players in their roster who are in great shape. We tried everything, but it wasn’t enough to make it competitive. At the same time, I think this season was successful for us. We played very well in the VTB League quarterfinals and semifinals and earned a spot in the EuroLeague, which was our main goal. I think that’s a success. Many of our players made a lot of progress, starting with Slava Zaytcev. He deserves to play in the Russian national team. I’d also note Stas Ilnitsky and his confident play. I think everyone gave everything they had. I want to say a big thank you to our fans for the excellent support. They were always with us, win or lose, and that means a lot. Thank you so much!".
Поделиться в FacebookПоделиться ВконтактеПоделиться в TwitterПоделиться в ОК