Huge performance (32 pts, 6 rebs, 5 assists) by BC Khimki leader in Alexey Shved led our team to a perfect — 99-90 road win over BC Nizhny Novgorod in a VTB United League game! The next game BC Khimki will play at home on Sunday, April 9, 2017 vs. Zenit St Petersburg. Tip-off at 17:00 msk! 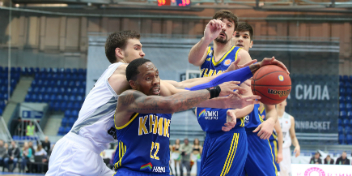 "It was a very tough game. Nizhny Novgorod plays a little different from other teams. They’ve got players like Gubanov, Zubcic and Vene, who can all play at the four and five position and shoot the ball well. We had a lot of problems on defense. When we switched, we didn’t do a very good job one-on-one. In the end, we won. We’ve got three games remaining and we’re going to battle for second place. Shved had a tough time since he hadn’t practiced in a week. He’s still got pain, but he played well".
Поделиться в FacebookПоделиться ВконтактеПоделиться в TwitterПоделиться в ОК