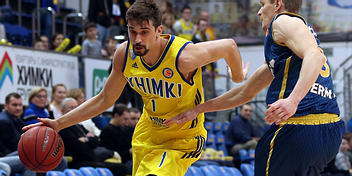 "We probably need to talk about the first quarter, when our players looked lost. Unfortunately, the teams are at different levels, which had an impact at the start. Then we settled down, but couldn’t hit easy shots. Maybe that’s why we got tight on defense and gave up some easy points to Khimki. We evened things out a bit with our defense and tried to keep things simple on defense in the fourth quarter, which brought some results".

"We started this game very seriously that was the key for a win. Parma is a good team. Three quarters we played very seriously but also in the last one we had concentration. Sometimes this kind of a game is good".

"Parma plays its own game; they shoot at will, don't run plays. It's hard playing against such teams. We had a great start, at the second half we lost discipline a bit, but our lead aloud us to play like this. We've got some tough games coming up and we need to focus on them".
Поделиться в FacebookПоделиться ВконтактеПоделиться в TwitterПоделиться в ОК