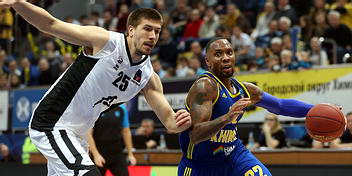 "First, congratulations to Khimki; they played better than us. I think the third quarter was the key. We played better during three or four minutes, but then Khimki every time made easy baskets. Also, when you lose the first quarter by a margin of 17 points, it’s impossible to win. Nothing more to add".

"I think we started the game softly. We didn’t have some luck because we had like four or five open shots and missed them. Then Khimki started playing harder than us. They really showed us the level of a EuroLeague team. I think Khimki recognized us like a team that would fight till the last seconds. We went out in the third quarter playing better defense. We started moving the ball a little bit better and made some shots. The second half was obviously better that the first".

"The first half we played well both in offense and defense. The second half turned to be different, but tonight all the players had time on the court. We finished the first round of the EuroCup and now we are waiting for our opponents in the second one".

"We have already played with Bilbao and this was our second game. Both games were alike, but in Spain we made a run in the third quarter and now did it from the very beginning. I think we set a good pace, whereas Bilbao played without ambitions and desire. So the outcome is very natural. They had a really bad game tonight. We are happy to clinch first place in the group. Hopefully, we’ll do the same in the Top 16".
Поделиться в FacebookПоделиться ВконтактеПоделиться в TwitterПоделиться в ОК