BC Khimki played hard in the second half and managed to score a crucial road EuroLeague win over Crvena Zvezda Belgrade — 79-70 with 29 pts by Shved. Now on Thursday, January 18, 2018 our team will face Olympiacos Piraeus in Mytischi. Tip-off at 20:00 msk. 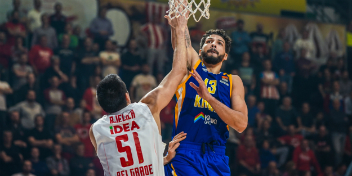 “We expected something like this. With the atmosphere here so tough, we needed to play together to manage to win the game. It's a great win on the road for us. We have 10 wins in the EuroLeague, something very important for us. We are a completely new team and playing without our first rebounder, Thomas Robinson. I have to give credit to our players. The second half we started scoring more. We had patience and that gave us more opportunities to score. It was important, too, that we had better percentages in the second half. We took confidence from this and managed to win. Every game is a different story. No matter what you do, win or lose, you need to focus on the next game. The EuroLeague is very tough to still be thinking about what happened a few days ago. For us it was very important that we managed to win this game. In the first half, we shot 25% on twos and threes, but we had contact with the score, only losing by six or seven points. And I said to our players in the locker room, 'Let's keep being patient. Let's find better shot opportunities and somehow we'll manage to win.' It happened like this. We had good ball movement, we shared the ball extremely well in the second half, and we found our shooters wide open. And, of course, Shved at the end of the game was very important. Although we couldn't stop Rochestie, and Dangubic played well, we managed to win a very important game for us. I have to congratulate our players. Every win on the road is very important”.

“I think the key moment was a little bit in the third quarter when we took a step up in defense. We got stops as soon as the second half started, which was great for us. We kind of fed our offense that way. In the fourth quarter Alexey his some really big shots. That’s what he does and we love him for it. I think that was probably the biggest moment when Alexey sealed the game with those two big threes he hit… It’s a great environment; it reminded me a lot of college. The fans are very energetic; they have a lot of passion for the game, which I love. It was a great place to play. I love playing in places like this because there’s so much energy”.

“First of all, it's an important win for us because we lost a couple in a row. We needed a game like this to come back. Of course, we are happy, especially to win here with these fans. I think that the best atmosphere in the EuroLeague is here, and it's very hard to play against Crvena Zvezda with this crowd, so we are happy. My teammates and coaches trust me. I just want to play hard every game. If you win it's great, but if you lose it doesn't matter how you play. We played the whole game the same way but at the end we played better on defense and got a couple rebounds. The whole team played wonderful”.