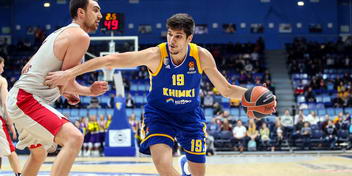 “Of course, I'm happy. If we consider the level of our opponents tonight, you have to be happy. We had two tough games, in Belgrade and today, against two strong teams. We have to be happy. I don't believe in luck. I believe only in team effort and today we had a good team effort. I would like to congratulate our players, our coaching staff and the fans. It was a very important win for us, our second in the EuroLeague in this very busy week. We were very solid offensively and defensively; basically defensively. Olympiacos scored only 25 points in the first half. We had energy, we had concentration and played very strong defense in the first half. On offense, we had open looks and we executed with good percentages. In the end, we managed to win in a way that looks easy, but as I said, the players on Olympiacos never quit, never give up, so they were fighting until the end. So it was a very important win thanks to our players and congratulations to them”.

“It’s all about team defense. I think we did a really good job on defense. We knew that Spanoulis is a really good passer. Milutinov and Printezis have a nice relationship as far as they know what to do well on the floor. So, we did the best we could to make sure they wouldn't make any easy baskets at the start of the game. We rebounded the ball really well and went on transition. Overall, I think we just defended better than we normally do. Everybody was locked in, paying attention to details, and we played really well”.

“It's about Charles Jenkins, who set the tone first on defense, coming off screens and guarding Spanoulis. His defensive intensity really helped us today. I think it was more of us playing well, too. We moved the ball a lot, defensively we were talking and managed to take them out of what they were usually doing. We have to continue doing this in bigger games. We didn't think about points difference, as it was just important to win because they beat us previously. It was a good win for us”.
Photo