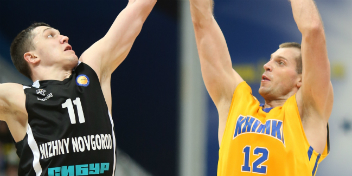 "Nizhny Novgorod is a very good team. They play fast and have good shooters. I think it's a dangerous team. They have really good players in Kane and Boynton who give big energy to the team. They are excellent one-on-one; shoot the ball, play low post and make isolation situations. But it's not all about these two American guys as Nizhny has Russian players who play very good with confidence. Everybody is a excellent shooter and every time plays at big space. We expect a tough game and must fight forty minutes for win. Robbie Hummel joined us couple of days ago. He is a good player who has European experience. He is ready but we'll see if he will be able to play on Sunday".
Share on FacebookShare on ВконтактеShare on TwitterShare on ОК