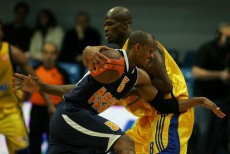 October 20, 2010 is a special date. It certainly has gone down in history. It's not just the birthday of the Russian Navy and the day of the Armed Forces of the Russian Federation. Today in Khimki again the group stage of the most prestigious tournament of the Old World – Euroleague – has started.

It was a pleasant occasion to introduce an updated pre-match performance. A few minutes before the first meeting of the Euroleague group stage with the Polish pans from Gdynia, Moscow region basketball players went to the presentation accompanied by very young basketball-lovers – the foster children of Khimki youth school № 1. The symbol of the sports generations continuity received a great ovation – the yellow-blue fans did not expect the very further developments. 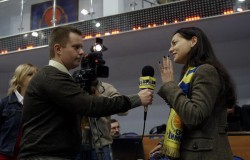 At the match there were a lot of guests of honour: a permanent supporter of our club, a well-known tennis player Andrey Chesnokov, Dynamo football players Luke Wilkshire and Tomislav Dujmović (invited by Zoran Planinic), and an unchallenged leader of world chess, the 2008 world champion a grand master Alexandra Kostenyuk.

– It’s a great warm atmosphere today, – Alexandra shares her impressions with us. – I like basketball, I especially appreciate dynamics of this game. Today I sincerely wish BC Khimki good luck and a beautiful victory.

The starting lineup of BC Khimki was: Langford, Eze, Lopez, Panin and Monya. First points to our team brought Eze. The Ben’s initiative was supported by his teammates Lopez and Langford, and after an accurate three-pointer made by Sergey Monya the score was 9-2. After only 3 minutes, Tomas Pačėsas decided to take a time-out – the game of his subjects from the first minutes obviously had no luck: a situation with throws was poor too. Nevertheless, a series of BC Khimki players errors allowed the Poles to reduce the gap to the minimum "-4".

After a brief pause, the highest BC Khimki player Aleksey Savrasenko (his height – 215 cm) was accurate from the free throws, but in the very next attack, thanks to the skilful drawing of a combination, Aleksey put the ball into a hoop from the three-second zone. But the opponent managed to make spurt "+5". Sergio Scariolo felt that something was wrong and took two time-outs in succession: during them the support group along with the Hedgehog did not allow the stands to have a tedious time. After the pause Lopez and Langford scored 5 points. At the long break the team went with the score 37-35.

The second half of the meeting began with an accurate three-pointer from Planinic. Then Eze scored with a foul. Within three minutes, he was fouled by the guests four times. At the end of four played minutes the difference in the score was "+10" in favour of BC Khimki – 55-45. Solo passages from Langford, three-pointers from Planinic and Fridzon became a real decoration of the third quarter, which ended with figures on the scoreboard 63-55.

The final quarter of the game put everything into place. First Fridzon and then Lopez brought to BC Khimki three points each. 5 minutes before the end of the match the advantage of the Moscow Region team was 7 points, but Prokom again managed to reduce the backlog to “-3” for 3.5 minutes before the beep. Valuable five points brought Langford and Fridzon and the stands gasped. However, the coach of the Poles reacted to the changes immediately – he took a timeout, which inhaled into the game of his players new forces. The audience was provided by a “Validol ending”: the intrigue did not die until the last seconds. As usual Keith Langford solved the problem: his accurate free throws along with an unrealized desperate “dunk” from Ewing – and “+6” for 24 seconds before the beep.