Gill's tip-in with the buzzer gave BC Khimki a huge home win over Unicaja Malaga in the EuroLeague round 21 home game — 68-66. Now on Monday, February 5, 2018 our team in Moscow will face CSKA in a VTB United League game. Tip-off at 19:30 msk! 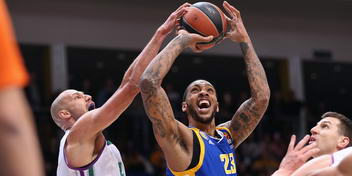 “It's not about the last play. It's just about the instinct of Anthony Gill going for the final rebound and making a crucial tip-in. It was a must-win game for us today, and we played with a lot of pressure. On the other side, Unicaja had nothing to lose as Brooks and Nedovic were out. They played very consistently the whole game. For us, the pressure was huge today. If I am not wrong, we shot 15% on threes, 5 out of 30-something on our home court. So, if we manage to win games like these, this is a very, very important thing”.

“We had a terrible offensive game, starting with me. I missed a lot of my open shots. We just kept going and playing. In the end of the game we made a tip-in that is great for us. It’s a big win for us as we really needed that, especially in front of our fans who were great. To get that tip-in was great; I missed so many shots before that, but I felt myself going hard and getting that rebound, which I did. We are excited about that. I think Tyler [Honeycutt] is the main hero of the game. He got a lot of key rebounds for us and we needed that a lot”.

“We missed a lot of open shots. It’s good that the guys rebounded well and got second-points chances. At the same time Unicaja played well rebounding, as they are one of the best EuroLeague teams on the offensive boards. In the first half, they got 8 offensive boards and got 8 more chances. We played soft defense and had to put more pressure on the ball. In the second half, we scored our points and rebounded better. We fought and helped each other that led us to clutch time. Thank god, Anthony [Gill] made that tip-in and we won, but we had to show more emotions and aggressiveness from the very beginning”.
Photo