BC Khimki made huge defensive effort in the second half and got a crucial road win over Zalgiris Kaunas — 74-84. Shved and Gill finished with 20 pts apiece, Honeycutt added 17 pts. Now on Monday, February 12, 2018 our team at home will face VEF Riga. Tip-off in Khimki at 19:30 msk. 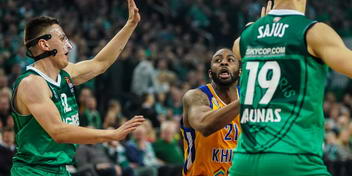 “We played excellent defense, we switched all the screens and we were very focussed on their weapons. On offense we were consistent passing the ball and sharing the ball, and in the end we won a game which is not easy here in a very hot environment. Zalgiris is a great team. It’s one of the biggest victories of the season and now we’re looking forward to the next game. We talked a little at half-time and said we needed to be consistent on our switching defense, and to box out and grab the rebounds. Tyler Honeycutt helped a lot on this, grabbing a lot of rebounds over people, and this was a crucial part of the game”.

“It’s huge for us to get a road win against a great team which was rolling. I’m so happy for us and excited for the rest of the season. We started playing defense in the second quarter. They were up but we came back when some guys came in and helped our defense, and we got back into the game”.