BC Khimki scored a huge home win over European powerhouse Panathinaikos Superfoods Athens — 78-61 with 20 pts by Shved and 16 pts by Gill. Now on Thursday, March 1, 2018 our team will face Baskonia in Spain. Tip-off at 23:00 msk. 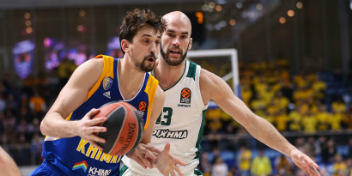 “Congratulations to Khimki because they played much better than us and they deserved to win. We did not play enough defense for this level in the first 20 minutes, especially in the last part of the second quarter. The last four minutes we played very bad on defense and very bad on offense. On offense, we did not follow the plan that we had before the game, and it is impossible to win that way. This is why we could not score more than 18 points in any quarter. It is clear we did not play offense at all, and in the first 20 minutes we did not play enough defense”.

“It was an important game for us. Every game now counts as two, every game is crucial. We need to be very concentrated and focused on our opponents. We had a solid defensive game; we allowed 61 points. We are talking about a very talented team offensively, with versatility, and with very good players. But we stopped the creation of Calathes and we did not allow them to move and share the ball. Then it was easier for us to protect our basket and pack our paint. We did not have a great night on offense, but because of the defense we won the game, I can say easily. Our team has 14 victories in the EuroLeague, which is a big number for a new team. We have 7 games left, we have to keep fighting in every game like we have done so far, starting with next game in Baskonia. We were thinking about the margin we lost in Athens, but it was difficult to overcome that big difference from the first game. We are satisfied with this win”.

“We just wanted to put a lot of pressure on Calathes and not let him create. We know they are a switching defensive team; and usually when you switch you know you will be switched against in this kind of offense. So, I think we did a good job on this of our guards finding options. [Thomas Robinson] brought energy tonight. He had an and-one play, but it takes some time now, like Mike James, who is not one hundred percent in shape. It was his first comeback game and we didn’t expect much from him”.

“We know they had a lot of players with huge talent who can score. We know that Calathes has the best assisting performance in this EuroLeague; he is a very good player who passes the ball and involves everybody. So we tried to stop Calathes and stop their shooters. They brought in two new guys and they needed time to catch the chemistry. Also, we have one big guy back in the rotation, which is important for us because this long season in the EuroLeague and VTB League is tough. You need to have more people involved. It’s a good win for us but now we need to turn the page for the next game”.

“Everybody knows they are a great team and they have good, experienced players. They were in the top four of the standings before the game. We just played hard defense and passed the ball. We remembered that game when we lost by 28 points [in Athens] so we just came here to fight and it is an important win for us. I feel better, but still not at 100% shape. I need some time to recover. We have a week right now and I will be ready for the next one”.
Photo