On Monday, November 14, BC Khimki moved to a French city of Cholet. Tomorrow our team will play its first Eurocup group stage game with the local team Cholet Basket. The beginning of the meeting is at 20.30 CET (23.30 msk).

Game with Cholet Basket is a first match for our team in Eurocup 2011/2012. Our team moved to France in full strength — so far injured Croatian guard Zoran Planinic joined the squad. The yellow-blue landed in Nantes, and moved to Cholet via bus.

The French club is not a Eurocup rookie, vivid Euroleague 2010/2011 performance makes respect and fear this team. The team debuted in the first division in the 1987–88 season and after managing to get to the premier league in only 12 years. After winning the National Cup in 1999, Cholet automatically qualified for its first participation to the Euroleague (3 victories – 13 defeats). During the 2004–05 season 10 of the 12 players in the first team derrived from the youth system. Some of the most illustrious players who had their debut in the team are Antoine Rigaudeau, Jim Bilba and Mickaël Gelabale.

During the 2008–2009 season, Cholet was defeated by Virtus Bologna in the EuroChallenge's Final (75–77). In 2010, Cholet finished first of the 2009–2010 Pro A League regular season and won the championship after defeating Le Mans in the Play-Offs Final (81–65). Thanks to its national champion title, Cholet was automatically qualified for the 2010–2011 Euroleague season. Cholet was eliminated during the first round (4 victories – 6 defeats) of the 2010–2011 Euroleague after defeating prestigious (and at the time unbeaten) Fenerbahçe Ülker (82–78).

Cholet is a commune of western France in the Maine-et-Loire department. It was the capital of military Vendée. Its population is about 55000 people (census 2006). Cholet stands on an eminence on the right bank of the Moine, which used to be crossed by a bridge from the fifteenth century. It is about 50 km southeast of Nantes.

During the early years of the French revolutionary wars, the town found itself at the heart of the counter-revolutionary struggle in the Vendée, culminating in October 1793 with the Battle of Cholet which was won by the republicans and followed by a period of brutal government repression.

La Meilleraie is an indoor sporting arena located in Cholet, France. The capacity of the arena is 5,191 people. It is currently home to the Cholet Basket basketball. Cholet Basket fan-club names les C’BULLS.

— Cholet Basket is a very serious team with a good roster. Last season the French team took part in the Euroleague and played quite well. It’s a fast and offensive squad, the guys like to score three-pointers and first of all we have to play tough in defense. Home-game factor will be a good advantage for our opponent and for us this game will be not an easy going. Nevertheless we are as usual ready for a battle and go to France only with a one goal – victory.

— The game with Cholet Basket is the first BC Khimki match within the bounds of Eurocup and we will try to do all our best for a victory. We scored eight victories in a row and plan to do a ninth win. I don’t know well this team but at the training we saw video and I got first conception about Cholet. Usually French teams play very tough, in the rosters there are a lot of good offensive players and, to my mind, the game will be hard for us. 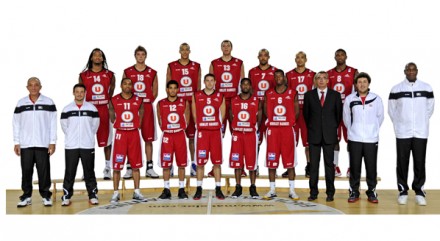