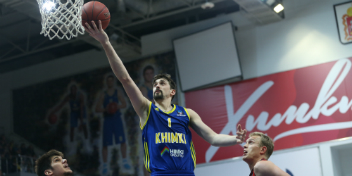 He also posted a team-high 5.2 assists, ranking sixth in the competition, and was Khimki's second-best rebounder with 4.0 per game. He made an even greater impact in the quarterfinals against Valencia Basket, posting averages of 20.7 points, 7.3 assists, 5.3 rebounds and 1.0 steals in three games, and in the process earned quarterfinals Game 2 MVP honors.