BC Khimki outscored AX Armani Exchange Olimpia Milan on the road, due to EuroLeague career high of Shved with 29 pts — 77-71. The next game our team will play at home on Sunday, December 10, 2017 with Nizhny Novgorod (in Khimki). Tip-off at 14:00 msk. 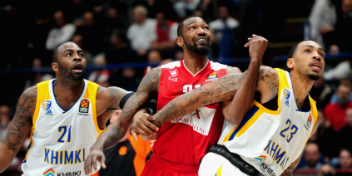 “We were very solid in the second half. We played as a team. It was remarkable how we controlled the game. We minimized our turnovers. We had 9 turnovers in the first half and it was important for us to minimize our turnovers, to be consistent on both ends, and achieve this great victory. It is difficult to play here; it is not easy against such a talented team like Milan. We are happy for our second victory on the road. I appreciate the players’ efforts. And we did whatever we could to win this important game for us”.

“My teammates trust me, and they pass me a lot of balls. I just played my game and everybody played good. The first half they played much better than us, but we kept playing our game and just stayed together. Any EuroLeague game is hard, and this one was for sure. They started the first half really good and played great, and scored a lot of easy points. In the second half, we started playing more aggressive. We moved the ball well, and that’s why we won, I think”.