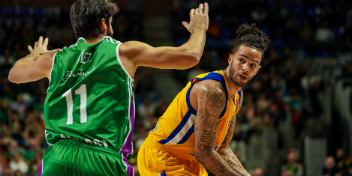 “It was a very interesting game. Both teams played well offensively but defensively I have many concerns about our team. For example, in the second half we made just four fouls, allowing them everything; big percentage from inside the paint. We let them find confidence. For me, the crucial moments of the game were two long range threes from Diez. Our game plan was to minimize the offensive rebounds of Unicaja which is always very strong at this point; but we couldn't. Finally, they had 15 offensive boards that is a big number for this kind of a game. Congrats to Unicaja. We have to look forward and go on”.

“I think, we didn't do some little things really well. We got beaten on the offensive glass which means we didn't rebound. I put it on myself as well. I think, we have to do a better job on rebounding. Malcolm [Thomas] really cared us with the rebounds tonight but myself I didn't do a good job. We have to do a better job next game trying to get a win. It's always disappointing to be so close and then lose the game in the end. But I think we'll take a lot from this game. It's too early in the season and we have to learn to learn from this. Moving forward, we have to be better”.
Photo