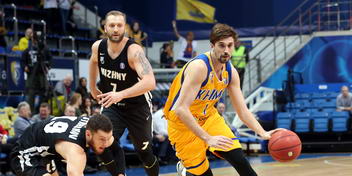 “Congratulations to the team on this big win in the overtime, finally. It was one of the most exhausting games I’ve ever coached. The team is exhausted because beyond injures of Markovic and Robinson, right now we had to face one more injury of Zubkov. Also, Monya was sick, and, of course, right now our roster is not so deep, especially after the game with Armani Olimpia Milan, where we gave huge intensity to win. After a long trip we had to face the team of Nizhny Novgorod that plays excellent. We know, they have patience and found big shots from Jelovac, sometimes contested, sometimes from a very long range. Finally, having missed 19 free throws, a lot of layups and three pointers, winning this game is something remarkable. The only positive thing for our team is that we were tough on offensive rebounds as we made 25 offensive boards. That’s why we won the game, finally. Whatever happened in this game wasn’t normal at all. Congrats to the team, thanks for the fans for their support. Now, let’s prepare for the next away game with Unicaja Malaga”.
Photo