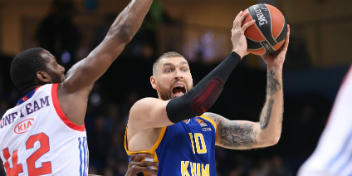 “We played good basketball in the first three quarters and were successful controlling the game on offense. We used well our pick-and-roll offense and found easy baskets, but all game, also in the fourth quarter, we allowed a lot of three-point shots. Most of them were really difficult shots. Monia's shot close to halfcourt and Shved's shots, we know that he can hit those shots, but many shots over hands. Finally, I think that Khimki played an excellent game, especially on three-point shots. If you score 17 three-point shots at 48%, it is very difficult to beat this kind of team. We missed a lot of easy shots, especially in the beginning of the second half, with Brown and Dragic. Khimki made them and in the last quarter, they broke the game”.

“First of all, every win is very important and this was a dangerous game for us tonight. During the game, we also missed (Marko) Todorovic with an injury and have a lot of problems right now with our injury list, but we managed to win this game. Like I said, every game is very important. I think we played much better in the second half on defense and finding open shots that we made. I enjoy [coaching Alexey Shved]. Sometimes, he needs to be a little bit more under control, but this kind of talented players, they are fun to watch for fans. For coaches, he is a big weapon but somehow you need to control him sometimes”.

“I think we let them go in the game and couldn’t get stops. In the end of the third quarter they had probably ten possessions in a row, got fouled and scored. When we started to stop them in defense, we got a chance to win the game. We know they were gonna play hard like every team in the EuroLeague will deliver you problems, especially with a new coach. The guys were motivated to show their best play. I think they did a good job. We didn’t want to underestimate them as we knew the coach would give freedom to some guys who tried to take it upon themselves trying to win the game. Also, I was happy to see my ex mates as I had a good year with those guys”.

“I think in the fourth quarter we started playing really hard on defense which gave us really good options in offense. We passed the ball; we moved the ball really well finding open shots and made easy baskets. Yesterday I went to the orphanage and it was excited to see those guys tonight. I’m glad they came to our game. They really made me happy to see their joy”.
Photo