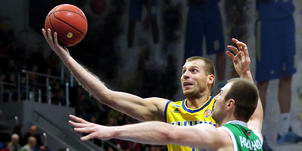 "The team was tired after the game against Fenerbahce, but that’s not an excuse. We played terrible defense in the 3rd and 4th quarters. Giving up 90 points to Khimki at home and hoping for a win is tough. On offense, we also made mistakes, including 10 misses at the free-throw line. That might not seem like a big deal, but that’s what allowed Khimki to get the momentum. Khimki was better today".

"We knew what to do, that's why we won. I’m satisfied with the team’s play on defense. I’ve said over and over again, that defense is the key to success. Why did Shved only play 15 minutes? He picked up his 3rd foul really quickly. In general, I rely on him to pull out tough games, and decide the outcome when it’s close. Today we were in the lead and it didn’t make sense to keep him on the court".
Поделиться в FacebookПоделиться ВконтактеПоделиться в TwitterПоделиться в ОК