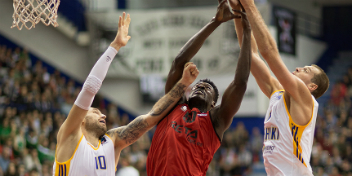 "Very important victory for us. For me Bilbao Basket is a team with big talent and experience. If you don't play good defense it's very difficult to play here, with the support of the local fans. I think, in some moments we played good defense and for this reason had a big point difference. In the second half we didn't play well. I don't like it and that is the very thing we must improve. We started playing very concentrated in defense and had easy points in offense. Shved played well but also other guys, I mean the whole team did a good job as in defense as in offense. Brown played first game for the club and it was good. He has quality and for this reason we signed him. We'll see next games".