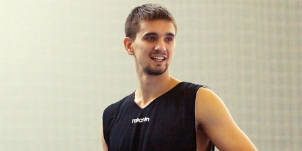 Russian forward Valery Likhodey (29) signed with BC Khimki. The agreement between the club and the player has been approved for season 2016/2017 (one year). We welcome Valery to our club!

"Valery is an experienced player who spent several seasons in the Euroleague and the Eurocup. He plays as a small forward, but can also close the position "four". Moreover, he is a great scorer with good three-point shots. Last season this position was problematic for us, so given all the circumstances, we decided to sign a contract with Likhodey. Hopefully, in our club Valery will be able to exercise his rich potential".

"We were interested in signing with Valery, as he plays at the required positions three and four. But the most important point is his ambition and desire to play for BC Khimki. I talked to him, and he showed that he really wants to play for our team. Valery is a versatile player, his strongest side is a long range shooting, he's a good scorer, but at the same time, I expect him to show a confident game in defence, on rebounding and constant activity at the court. I'm sure, he's ready for this challenge".

"Signing with BC Khimki is a new stage in my career. Recent years turned to be not very good for me, and now I am absolutely confident that under the guidance of such an experienced coach in Ivanovich we will do a great job, and I, in turn, will make a step forward in my career, "grow up" and finally show what I can. I played in Khimki in the beginning of my career, as this is my first professional club, so after all these years, I can say that I'm back. It was always tough to play with Khimki when I was in other teams. This is a great team with big goals and ambitions, that consists of professionals. This is exactly what I need. I think that in the last few years, I didn't realize myself even half, so I hope that in BC Khimki I will be able to grow as a player and benefit for the club. I'm happy to become a part of this serious squad".