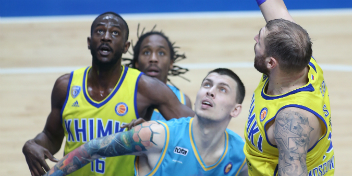 On Monday, April 17, 2017 BC Khimki on the road will face Astana in a VTB United League game. Tip-off at 17:00 msk. Watch LIVE at VTB UL official website.

“We have only one option — to win this game, but we know it will be very difficult. Astana plays very well; it's a team that plays tactically very well and has different types of defense. In offense they play with patience. They have their own system; they are very disciplined and at home play really well. Astana lost four games in a row but they did it on the road and faced strong teams. I think, at home they play a little bit better than on the road. I hope, everyone in the team understands the importance of this game. We must play with intensity, patience and confidence. We want to protect our third position before play-offs”.
Share on FacebookShare on ВконтактеShare on TwitterShare on ОК