Russian Championship. We will challenge for bronze medals and ULEB Cup21 may 2007

The fourth game became the last in this series. The winner wasn’t determined in statutory playing time. Khimki forced overtime and surrendered just one point in a matter of seconds — 96-97 2ОТ (16-16, 22-19, 13-29, 25-12, 10-10, 10-11). The series of semifinals is closed out. Now BC Khimki will compete for the bronze. Our opponent is Dynamo Moscow. The first match will pass on the 26th of May at the Basketball Centre of Moscow Region, Khimki. 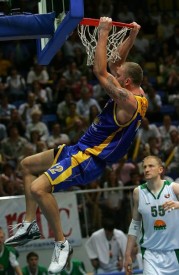 The starting five was no different from yesterdays: Booker, Savkov, McCarty, Veremeenko, and Lampe. The UNICS starting front line was changed: at the beginning of the match Sokolov and K.Lavrinovich got on the basketball court.

McCarty registered first points in the game. Topping off minute 3, the home team was working its defense and UNICS couldn’t score. McCarty worked wonders: two three-pointer – 10-5 and foul in the attack. Lampe chalked up two fouls and was switched for Wolkowyski.

After the time-out Fridzon, Dyachok and Pozzecco got into the game. UNICS leveled the score.

More than one minute in the second period both teams couldn’t score. And Pozzecco took up the running, he scored, passed to Fridzon and forced Mescheryakov twice violate the rules.

Over again McCarty worked brilliantly — 28-19. After it UNICS decided to play zone and closed the gap to 2 points.

In the first half of match teams didn’t played their trump cards: Khimki won rebounds slightly and UNICS scored less three-pointer than usual. The game was accelerated and players started to make mistakes more and more. Khimki yielded the third period — 46-58. In the fourth period Khimki tried to overcome big point deficit and they succeeded in resolving this problem. Yellow-blue battled for the each ball and played the defensive pressure well. With 0:47 minutes on the clock Booker made both free throws and led Khimki ahead. But the score is 76-76, when the final whistle is done. Overtime. 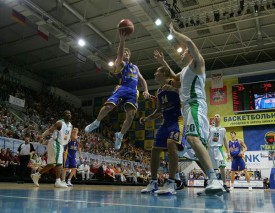 Immediately Khimki received “5 down” points and had to cut a lead. The referee didn’t determine the UNICS foul and teams went for the break to continue the fight in the second five minutes. Lampe made some free throws and Khimki led — 91-86. Chikalkin had three-pointer to his credit. Booker answered back. With 1 point down and 0:02,8 Khimki threw in. Booker tried to score throwing on half-court, but …UNICS was lucky this day.

— This game was one of the most difficult in my career. At the end of match players were tired. The psychology came to the fore. Today the winner is the team which didn’t strained much nerves and could collect strength.

Kestutis Kemzura, the head coach of BC Khimki:

— I want to congratulate the team UNICS with the victory. This series was very difficult. UNICS has strength in deep, that s why Kazan players were less tired. Losing in such a way is very offensively. I can’t blame my players. We had no luck. We will compete for the bronze medals.