Russian Championship. BC Khimki won bronze medals and The ULEB Cup berth31 may 2007

The final duel in Moscow became the last in 'bronze' series. After the long break of match Khimki demonstrated inspired game and gained the participation in ULEB Cup — 73-61 (18-24, 19-20, 13-5, 23-12). The battle for the third place is concluded by the BC Khimki triumph.

Guests got on the basketball-court with usual starting line: Booker, Fridzon, McCarty, Veremeenko, and Lampe. The score is opened by McCarty. Khimki pulled away after 'the bomb' of Fridzon — 11-7. But at the beginning of match Dynamo attack line was stronger and Kemzura was obliged to call a minute.

On the 8th minute Papadopoulos chalked up two fouls and was switched for Focis. But Lampe was unmarked, but couldn’t score. He registered a first point only on the 14th minute, but he was really good at defense. With 25-37 Kemzura called a time-out.

After the Savkov shot beyond the arc, Khimki cut the advantage.

After the long break Dynamo couldn’t score during 4.40. Lampe started to play at full capacity — 46-46. Pozzecco moved the game. He exhausted all Popovich strength and forced him to receive 5 fouls and go to the bench. In last period McCarty made the score — 52-49. With 6.49 on the clock Khimki players had all the play – '6 points up' and destroyed every hope of Dynamo for success.

'The bronze serial' is ended. Khimki has got medals and will fight the ULEB Cup next year. 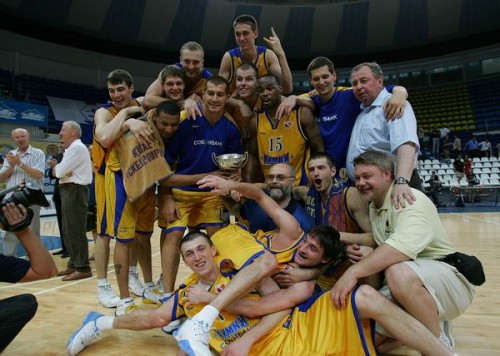 Kestutis Kemzura, the head coach of BC Khimki:

— I am very happy, but cant realized it completely. I want to thank my players, they believed in me. There is no good coach without good players. I am glad to work in so friendly team. And I will repeat again and again, our fans are the best!

During the game your team dropped behind more than 10 points. How had you succeeded to turn the play around its head?

— We expected that Dynamo wouldn’t give presents, and we decided to battle from the beginning to the end. During the break we understood that wanted to win greater. Our players demonstrated that they have a strong character and will-power.

The plan for the next season is the Big final?

— Undoubtedly. Each soldier dreams to be a general.