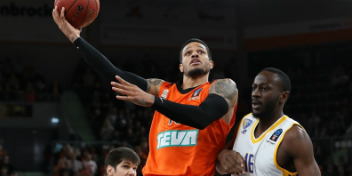 “It’s clear that ratiopharm Ulm is an excellent team in transition and on fastbreaks. They have good shooters who take quick positions. They play many times one-on-one situations and do it well. Like every German team, Ulm is fighting all 40 minutes. In Germany, Morgan, Butler and Braun had a good game in one-on-one situations but it’s more important to stop their fastbreaks avoiding easy baskets. Ulm’s leader Guenther is back. He is a leader of the team and with him it will be a more difficult game for us”.

“We are in a great mood as it looks like our team has found its game. We are playing good basketball, especially in defense. Hopefully, we’ll do it well with Ulm because the result will depend on our defense. We will score our baskets but to win this game we have to fight in defense. We have to win to obtain good chances of qualifying to the next round. Ulm is a singular team as they score many points in fastbreaks. It will be a very important game for both teams but we have to win it”.
Share on FacebookShare on ВконтактеShare on TwitterShare on ОК