BC Khimki will play EuroLeague games in Mytishchi29 july 2017 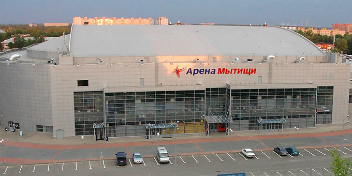 In season 2017/2018 BC Khimki will play EuroLeague home games at Mytishchi Arena (Mytishchi, Moscow Region), which meets all the requirements of the regulations.

Moving to another arena, and even to another city is a forced measure. Like two years ago, the EuroLeague informed BC Khimki about the insufficient capacity of the Basketball center of Moscow Region. This time we failed to agree the holding of EuroLeague home games at Krylatskoye Sports Palace (Moscow), for the same reason – Moscow Arena doesn't require by the regulations for clubs that do not have A license, 5000 seats. In this situation, the only solution was to find a stadium that would suit the EuroLeague management on all indicators. This was the stadium Mytishchi Arena, which is located in the eponymous town in Moscow Region.

Mytishchi Arena was opened on October 15, 2005. Till 2015 it was the home arena of the Atlant Moscow Region Kontinental Hockey League ice hockey team.

"Moving to Mytishchi is a forced measure. We would be happy to stay in Khimki and host EuroLeague home games in our beloved Basketball Center, but, unfortunately, it does not match the league regulations in terms of capacity. You need at least five thousand seats, and even the Dynamo stadium in Krylatskoye does not meet these requirements, BC Khimki is still a team of the Moscow Region, and in our region, there are only three arenas that meet the requirements. These are ice arenas in Podolsk, Balashikha and Mytishchi. As a result, we stopped at Mytishchi, as Arena Mytishchi is one of the most modern and comfortable stadiums in the Moscow Region, which, moreover, is closest to Khimki. Mytishchi has children's and youth sports school of Olympic reserve, so this city also has a basketball tradition. Of course, this decision was not easy, and we understand that it will not please all fans, but if we could stay in Khimki, we gladly did it. I can assure you that we will provide fans with transport and will do same things as two years ago with the arena in Krylatskoe. We will launch buses and minibus taxi from Basketball Centre and the metro station Medvedkovo. We'll try to make sure that no one feels the inconvenience".