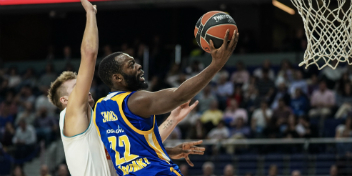 “It was a great game for us. We know that winning here is not easy. I think Real Madrid lost for the first game this year in all competitions, so we need to be happy for one night and believe in our team. For us, it was the first win on the road after the game against Olympiacos, in which we didn't play well. Today we were solid in both ends, defensively and offensively. When we controlled a bit the rhythm of the game without turning the ball over, because if I remember well, we had 11 turnovers in the first half, we managed to win the game, having patience on offense and finding the open man. As I said, everybody has to compromise that, in this new format of EuroLeague, winning or losing is part of the game. Last year, Fenerbahce won the title having a lot of losses in the regular season. I don't know how many years it will take for fans, clubs' organization and journalists, but everybody has to compromise with the idea that winning or losing is a part of this difficult competition. Even in the local leagues, especially in Spain — which is so difficult, you can lose everywhere — having games every two, three days in this level. Anyway, we are happy. We have four victories and one loss in the EuroLeague, but have a very difficult schedule, playing against CSKA in our home court on Monday in a VTB League game.So, congratulations to our players. Let's analyze what we did well and wrong, and let's go on”.

“This is an important win for us. Everybody knows how hard it is to play here, in this arena, with these fans who help them. They had 4-0 before this game so when we came here, we know it was going to be a hard game. We are happy to win this game. I always try to help my team and give 100%. I had a nice game today, but maybe somebody else can score [next time]. We just play as a team. We won, and this is important”.

“It’s always tough to come here and win. They are a really good team; they have a lot of great shooters and everything. They are always one of the best teams in Europe. For us it was important to just make it a one-shot game for them. Even though they got a lot of offensive rebounds, in the second half we were able to rebound better and make shots. We executed, we didn’t just come down and fire any shots, we made them play full offenses and we capitalized and I think that was important. As far as me, in the second half I just stopped caring about not being physical. In the beginning I started the game thinking I wanted to back off and ended up getting two fouls. In the second half I didn’t care any more and I wanted to be as aggressive as I can on defense and make good things happen. I think we played well in transition and were able to get a win”.