BC Khimki made a huge run in the second quarter, led by Gill, Shved and Anderson and scored a crucial EuroLeague home win over Baskonia Vitoria Gasteiz — 91-90. Now on Tuesday, November 14, 2017 our team in Athens will face Panathinaikos Superfoods. Tip-off at 22:15 msk. 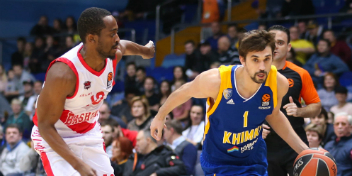 “I think it was a tough game for both teams. Our first half was very good, with good rhythm in offense. We had very good space, passed the ball, played good defense. But at this moment we are not able to play at the same level all forty minutes. In the second half, we played worse, with more turnovers that led to Khimki’s easy baskets. It caused our confidence and slowed us down in our offense. We have to improve these and more things, especially when the game is not in the right direction for us. We have to learn to be more concentrated, pass the ball better, especially when we have problems because the other team played aggressive defense like Khimki made in the second half”.

“The key was probably our defensive approach. Our first-half performance was maybe the worst this year, we played terrible in both ends, offensively and defensively. Especially defensively. We allowed almost 50 points in the first half. With this kind of performance on defense, we cannot win, especially in the EuroLeague where the level is really high. I was really mad in the locker room at halftime, not about winning and losing but about the way we approached the game. In the second half, we managed to win the game by playing much much better on defense. We won and we got to be happy. Every victory in the EuroLeague counts, every victory is important, especially against Spanish teams like Baskonia, which is in good form. I have to give Baskonia congratulations for great play, but also to our team because we managed to win one very difficult game. This season is really long, and the process to become a very strong team is also very long. We need to learn from every game. We have to be happy for a few hours because we have 5-1 and are currently in first place in the Euroleague. I don’t underestimate that and I am very happy about that, but at the same time, we have to improve our game a lot”.

“We kept fighting. We got down early but no one gave up and we kept competing till the end. Definitely, we expected Baskonia to play tough. We expected them coming here and fight. They came here to do exactly their job because we were loose on defense, trying to get the stops. We had a slow start and have to continue to improve all”.

“I think coach really got into us at halftime. We were not doing what we needed to do in the first half. He kind of yelled at us at halftime, and we kind of picked it up from there. We just didn’t come out to start the game as well as we should have. They are a great team, and we had to be ready from the start, and we weren’t. But we came out in the second half we proved we are a better team tonight. This win is great. But EuroLeague is so fast, we have a VTB coming up, and we just got to be ready to move on”.
Photo