BC Khimki had another tough game in the EuroLeague, now with Maccabi that ended not in our favor — 69-77. Now on Sunday, November 19, 2017 our team at home will face Zenit St Petersburg. The game will be played in Khimki, 16:30 msk. 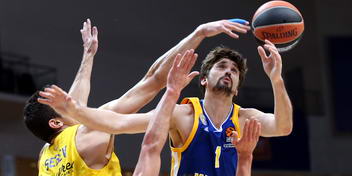 “We knew before the game everything about Alexey [Shved]. He is definitely one of the best, probably the best player in Europe. I think we prepared the game well. Also we executed well. You can plan whatever you want, but if the players on the court are not following the instructions, it doesn’t go well like in the previous game. But to lose a game by 20 at home and to come here mentally tough with a lot of personality, that’s what I‘m happy about. I think this game is our best game [on the road this season]. We won in Bamberg, but this game defensively was better”.

“First of all, congratulations to Maccabi. They had a solid game, especially defensively. From our side, one more time we started the game very loose. In the first quarter we allowed Maccabi to score 28 points, giving only two fouls. So, our approach in the beginning of the game was completely wrong, one more time, I mean how we entered the game. As always, we fought and played as a team but 20 our turnovers were the crucial end of this game. They hurt us a lot; we gave Maccabi opportunities in the transition. Finally, it was a one-decision game as we had two wide-open shots to go up in the score but we missed them. Maccabi hit on transition and probably the game was over there. Anyway, right now we have to handle the situation and play two high-level games in a row without two basic players in Honeycutt and Gill. Probably, we had a lack of energy tonight, that’s why many shots were short. For me, it was a matter of energy. Congrats to our players for their effort to come back in the game but I think it wasn’t enough because it’s a crucial part of this EuroLeague basketball how we start and enter the game”.

“We started out slowly with another team who got confidence and it was tough to play the opponent. We didn’t show great games in the past four games; we won two of them, but it was not enough. Turnovers are a part of the game, so I don’t think about them. Some of the best players in the world turn the ball over 5 times in a game”.

“I can’t say we started the game well as we were down by 10 or 12 points in the second quarter. We lost the two last games and need to fix this situation, make some corrections. We’ll keep working. Everyone is on equal terms as Maccabi players are also tired. We had the schedule practically without days off. We had to win tonight, but didn’t succeed. Of course, we miss Anthony Gill as he plays aggressively both in offense and defense. We are waiting for his return, as well as Tyler Honeycutt”.
Photo