BC Khimki did it better and scored a crucial home win over Brose Bamberg, Germany in a EuroLeague round 10 game — 82-73 with 26 pts by Shved. Now our team goes to Kazan to face UNICS at VTB United League game, tip-off on December 3, 2017 at 13:00 msk. 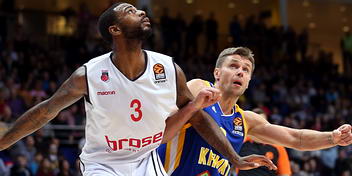 “Congrats to Khimki. Alexey Shved was a killer. I believe that according to the circumstances we were solid. We played a good game. We condensed our mistakes in the beginning of the third quarter, and this cost us a little bit. Then we made a great effort to come back. Again we were in the game, then the big plays of Shved killed us. But I believe that my team played as a team, we are improving. It was a hard-played game. Khimki has a lot, a lot of talent, in a lot of one-of-one situations. We had lack of size with the big guys, and we don't have such a deep rotation, so to win this game we needed to be perfect. And we were not perfect”.

“Thomas Robinson is a big asset for us so he was a big loss. At the same time, Tyler Honeycutt came back and played today after two months. He was important and crucial tonight, even though he's not in shape. But he helped us a lot to win this game, which was very, very important for us after three losses in a row. We needed to win today. We had to adjust to the lineup of Bamberg with four guards and we had to play defense away from the basket. At the same time, they are a team with a very experienced backcourt. Zisis, Hickman, Hackett: they know how to play and they have EuroLeague experience. We are not that experienced and made some silly mistakes. But we are very happy to win this game. It was very, very important for our team right now”.

“I felt good. Bamberg is a good team that had two big comebacks against Valencia and Barcelona. So they played hard all game; they are very well coached and execute their style well. We lost a few games but it's good about tonight. We didn’t have a lot of turnovers and passed the ball well; we shot pretty well from the three and started to work on defense, which was a key on our home court. After three practices, I had a feel of the court and tried to do small things that helped us win. I mean stops on defense and finding Anthony [Gill] in a couple of transitions, passes, giving some of the energy that I usually try to bring”.

“We had a black streak of three painful defeats in the EuroLeague, and when you lose several games in a row, it’s a bit depressing, although our start was great. I think in such a tough season all teams will have a slump like this. Moreover, we are building a new team with a new coach and many new players. So it is inevitable, though our players are good. The team is not done in one month, and we're still not playing at one hundred percent, although we have a lot of potential. Thank God that we've won at home and returned to the winning way. Now, after a good victory over a great opponent, we are positive. Of course, we missed Tyler [Honeycutt] as he's aggressive and a good defensive player, who works great on rebounds and has excellent athletic abilities. Today he really helped us, although he's still far from his best form, and he will have to gain at an accelerated rate”.
Photo