BC Khimki lost to defending EuroLeague champ in Fenebahce Dogus Istanbul in the road game — 67-71, despite Shved's 21 pts. Now on Thursday, November 30, 2017 our team at home will face Brose Bamberg. The game will be played at Arena Mytishchi, 20:00 msk. 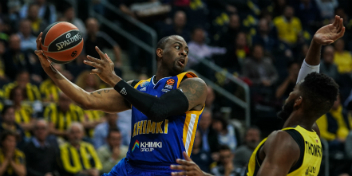 “It was a very interesting and tight game. We had our chance to win but didn't punish the shooting defense at the end of the game. Although, we had some options. Finally, we couldn't manage our problems with the fouls. Congrats to Fenebahce. It's not an easy place over here to play, be competitive and win. But we made it, despite the circumstances. I don't know but Robinson probably has broken his hand. I have to give credit to Anthony Gill because he played first time for so many minutes after his surgery, without even having one contact practice. Gill gave everything to the team and I'm so satisfied with his great attitude”.

“We tried to improve our game from the last week, and I think we managed to do this. At the end we fell short; we had a chance. We feel disappointment but comparing to the last week, at least we fought and made some improvements. We need to keep working and keep building from this momentum. We started playing defense that's how you need to play. That was a big part we didn't do last week”.
Photo