BC Khimki lost to Zenit St Petersburg in a VTB United League home game — 66-76, despite 34 points by Alexey Shved. The next game our team will play in Istanbul, Turkey, on Friday, November 24, 2017 vs. Fenerbahce Dogus. Tip-off at 20:45 msk. 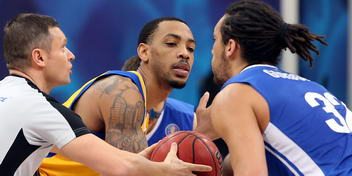 “First of all, congratulations to Zenit on a win. They deserved it because they played more consistently and very well all forty minutes. As for our team, we had a chance to win this game; what really hurt us is our percentage for twos, threes, very low for our team. Also, we had 60 percentages on free throws. Of course, we had a lack of players missing yesterday Robinson, and also Gill and Honeycutt. As you know, this week we played two very difficult EuroLeague games, including the travel to Greece. So, we had a lack of energy, which was obvious for our team. But it happens for all EuroLeague teams. After two EuroLeague games in a row the same week next game is always difficult. Now we had to play against a very good team. We have to manage right now, just to recover a little bit from our injures, waiting for our players to come back and work all together because the only way to get back on a winning process is to work both individually and together as a team. We have to find again our confidence, something that we had in the beginning of the season but missed right now. It’s all about work; we need to work again together, play better and win games”.
Photo