BC Khimki lost to Panathinaikos in Greece, EuroLeague round 7 — 65-93. Now on Thursday, November 16, 2017 our team will face Maccabi Tel Aviv at Mytishchi Arena. Tip-off at 20:00 msk. We need your support, dear fans! 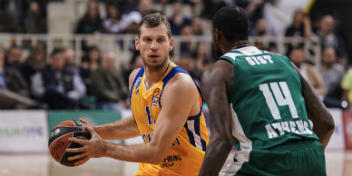 “Obviously, today it wasn't a game. It's better to say that it was one team on the court. We disappeared from the beginning, in any part of the game — rebounding, execution in offense, patience in offense. We had 3 our of 11 free throws in the first half. I can count more than ten times when we missed a lay up under the basket. What happened, it was normal, you know, because Panathinaikos has more than 60 percent for threes. We knew they gonna play with confidence and needed to be ready but we were not. So it's my responsibility. I had to prepare our team better for this kind of physical game that Panathinaikos showed to play. It's also my responsibility to keep our heads up and prepare the next game now because in two days we play again. You know, this is a process. Sometimes it's painful to play against experienced teams. Teams like Panathinaikos know how to handle this kind of games. As I said, this is our job after two days to play again. Congratulations to Panathinaikos on a great game”.

“It was one of those games. We didn’t stick to the game plan. We play Maccabi on Thursday so we’ve got to put this game behind us. It’s always tough to play here, but the guys have to be ready to come out and perform in front of a great home crowd. The way the league is, anybody can beat you on any given day but we need to come out and compete”.