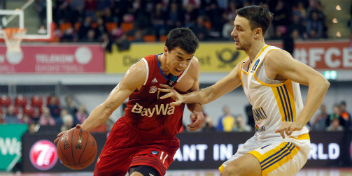 On Wednesday, February 8, 2017 in a battle for Group F fist place BC Khimki at home will face FC Bayern Munich, Germany in the 7Days EuroCup Top 16 game. Tip-off at 19:30 msk. Help us to support our team! We need each fan!

“To be first in the group, we must beat FC Bayern Munich by 17 points. At this moment, it’s a big difference but we must think about it at last two or three minutes of the game. First, we have to be focused on playing well and strong to win the game. After that, if we have a possibility, we’ll try. Bayern plays strong, very quickly and with big patience. They have very good inside players and shooters with experience. In the last game with ratiopharm ulm they had some luck to win it. Now we have one challenge and we’ll try to be the first”.

“It’s gonna be a big challenge for us. Bayern is a good team with good players that has been playing the best basketball. They do what they need. However, it’s not impossible for us and we have confidence to win the game. It’s gonna be a tough task but we have to show our best. FC Bayern is a physical team; their guards are very quick; their bigs are good. We have to matchup their physicality bringing the energy and intensity that they really brought to us in Munich”.
Share on FacebookShare on ВконтактеShare on TwitterShare on ОК