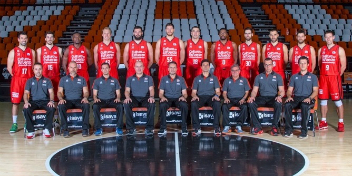 On Tuesday, February 28, 2017 BC Khimki in Valencia, Spain will face Valencia Basket in a first 7Days EuroCup quarterfinals game. Tip-off at 22:45 msk. Watch LIVE at Match! Arena, Eurosport 2 and Sportbox.ru.

“Difficult and very important game. I think Valencia Basket is the best team in the EuroCup until now because they have won almost all their games. At home, they play very well and quickly, showing typical Spanish basketball. They have many players who have been playing together for many years. Their system is about automatism. They played really well at the last Copa del Rey. We must stop their fast breaks, transition and limit their leaders in Dubljevic, San Emeterio and Van Rossom. I think these guys can make a difference. Valencia is a complete team with many players who are ready to decide the game”.

“Valencia Basket is a tough opponent and we know them from past years. The first game they play at home with a huge support of the crowd that will cheer the team. They have a good roster with such good players like Thomas and Sikma. We are expecting a tough matchup but we have to win. The keys for this series is tough defense and good execution. Also, we can’t miss our chances in the offense”.
Share on FacebookShare on ВконтактеShare on TwitterShare on ОК