Preview: Lokomotiv-Kuban vs. BC Khimki23 february 2017 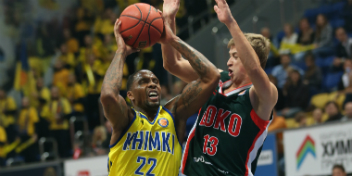 On Friday, February 24, 2017 BC Khimki in Krasnodar will face Lokomotiv-Kuban in a VTB United League regular season game. Tip-off at 16:00 msk. Watch LIVE at Match! Igra and Sportbox.ru.

“We'll face a very good team that didn't start the season well but now with the chance of the coach it plays excellent. They have big confidence and the players who can decide the game. The have players with big EuroLeague experience; strong inside players and three excellent points guards; as well as shooters who had a great EuroLeague season last year. We'll have a very difficult job. Loko played well with CSKA with an option for win; they showed very strong defense. They play good defense with contact; this is their main strength. We have to play with the same energy and patience as Loko does”.
Share on FacebookShare on ВконтактеShare on TwitterShare on ОК