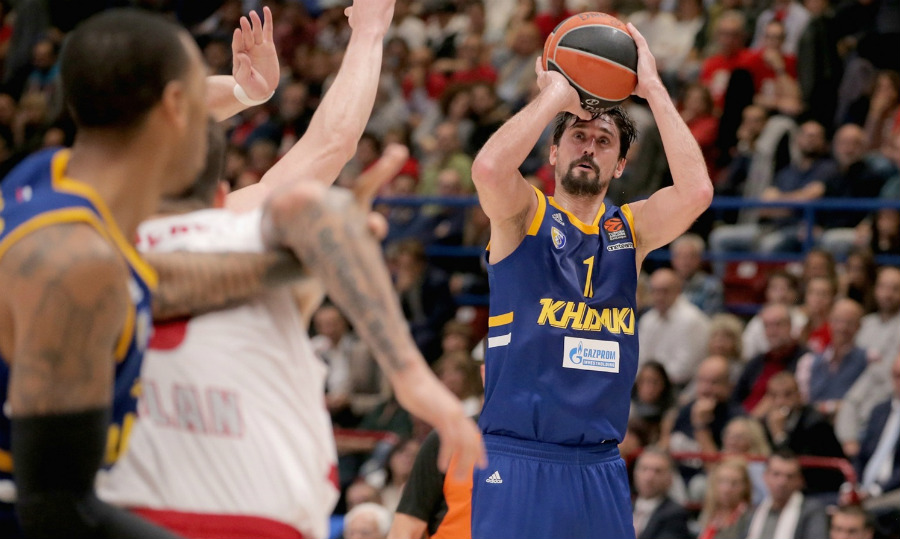 On Thursday, February 28, 2019 Khimki Moscow Region will face AX Armani Exchange Olimpia Milan, Italy in a EuroLeague round 24 game. The game will be played in Arena Mytishchi, Russia. Tip-off at 20:00 msk. Don't miss!

It will be 400th game for Khimki vice captain Egor Vyaltsev in Khimki jersey.

Khimki guard Charles Jenkins played for Milan during the 2015/2016 season and was a teammate of guard Andrea Cinciarini.

Milan's Mindaugas Kuzminskas and Nemanja Nedovic were teammates with Khimki guard Stefan Markovic at Unicaja Malaga during the 2015/2016 season. Kuzminskas and Markovic also played there the previous season.

Dee Bost left Khimki on the eve of the game.

“Olimpia Milan is a very good team. This season they have been playing great so far. They are very dangerous on the three-point arc. We have analyzed their game and realized that 90% of ther points they score from fastbreaks and on quick pick and rolls. They are a fast team that doesn’t like playing position game. They have such great scorers like James, Nedovic and Micov who show high percentage from the three-point arc and for us it will be very tough to play against them. Milan is not so dangerous inside, but from the downtown. We expect Shved to be back but I can’t say how he will influence the team’s play. He is one of the best players in Europe and for sure number one in Russia but it’s unknown how will his three-month absence affect his game. He is practicing hard and it’s obvious that Khimki with Shved and without him are two different teams. He should feel the rhythm again because you can’t do it during practices. Anyway, I hope it will be okay with him because Shved is a wizard, and we depend on his good game”.

“They are a good team. We played over there in Milan and it was a really close game. We have to execute our plays well against them and play solid defense because they have great offensive players who at any moment can sore 20 plus points. It will be a game where defensively we have to communicate and help each other out. Also, we have to be more energized if we want to win. That’s what we have to do”.

kurtinaitisthomaseuroleaguemilankhimki
Share on FacebookShare on ВконтактеShare on TwitterShare on ОК