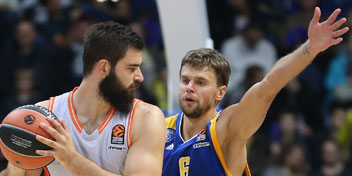 “It was a very important win for us as it was our first game in the EuroLeague. I have to remind you that some of our players don’t have EuroLeague experience, except probably Charles Jenkins and James Anderson who played there last year. So, I expected to be nervous within the team. But we managed to solve the situation and handled the pressure we had for winning the game. Even when we were down by 6 or 7 in the third quarter, we played solid defense in this period of the game. We came back very soon and it was very important, starting from our defense that was solid. Also, we found good options in transition. We were nervous but it’s normal. I’ve to give credit to our players who managed to win the game against Valencia who is Spanish champion. They have a lot of experience and we expected this difficult game all forty minutes. Also, I would like to thank and give credit to Khimki organization because they prepared this great arena, from ice hockey to basketball that was a great job for everybody. I want to say big thanks you to our fans as it was a kind of a sold out, like 7000 people supported us. For us it was a big help to win the game”.

“You know, it was fun. We came out with a win and it’s really exciting. In the beginning of the third quarter we didn’t come out to play and had to get back on track. We have to learn a lot from this game as we faced a very good team. It’s a good win for us. I think we are getting better. Every day in practice the coaches put us through drills and everything like that, trying to get us to play more together, and it’s working. It was great to play at this arena; the atmosphere was great. It was exciting; the fans were into and it was a great game”.

“I feel good. It’s our first EuroLeague game together. We have to fix the situations like in the third quarter at practices and see how we can do better both on defense and offense. You know, patience is the key”.
Photo