BC Khimki lost to Olympiacos Piraeus in Greece in the EuroLeague round 4 game — 75-92, despite 23 pts by Shved and huge 19 pts and 11 rebounds by Thomas Robinson. On Monday, October 30, 2017 our team in Khimki will face Astana Kazakhstan. Tip-off at 19:30 msk. 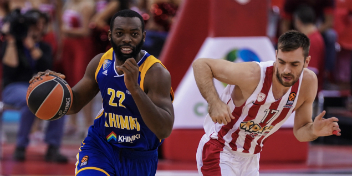 “It was a very difficult game for us, something that we expected. We tried to prepare our players for the different style of basketball that Olympiacos plays, especially in its home court, but obviously, our approach was completely wrong. We were thinking about how to get into the game through offense, but not with our defensive approach, trying to stop Olympiacos. We allowed, in the beginning of the game, 32 points in the first half from low post offense and transition through our turnovers. So, obviously, we should have played much, much better if we wanted to have luck in this game, but we are a completely new team and a lot of our players, all of our frontline, are newcomers in European basketball. They don't know what it means to play against Olympiacos in Piraeus and it was a great opportunity for them to have a good, strong lesson. Good luck to Olympiacos”.

“It was everything that it was supposed to be. A tough-fought battle against a veteran team with a lot of experienced guys. It was a tough fight tonight to come out on the bottom. Definitely, Olympiacos’s experience played a part. We knew exactly what's gonna be coming here. It was another slow start like we have been having and tonight we've needed to fight away better. You could use experience as excuse, but we know that's not an excuse as we just want to get back, work and try to improve”.