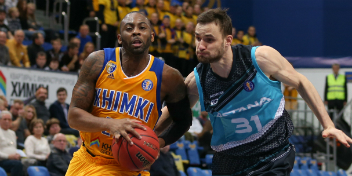 “I think it was a game where we saw the mentality and the personality of my team, what I want to have. I think, we controlled the game pretty well for forty minutes. We played against opponent, who has 98 averaged points in the offense in the VTB League; the team, that I like a lot. To be honest, we might have missed a chance in the end missing free throws. We are not happy about it at all. We respect Khimki organization and coaching staff a lot and I congratulate Khimki on this win. They are a very good team. I wish them best of luck. What went wrong on free throws? That's the game. I think, we did exactly what we wanted to do. We are the team that started [preseason] much later than other teams because of China tournament that we had to go and play without five important players for three weeks before the CSKA game, they didn't play any game. Who knows basketball, I can say it's a miracle how our team plays after such short period of time. But we need wins; we'll try to set for them next games. We know, we have very tough schedule. As I said, tonight that my players fought in a big game not thinking that they have no chance because we played with a very big name like Khimki that we respect a lot. We know, that Khimki had three home games in the EuroLeague and got three easy wins. I think only this says a lot about this team”.

“For us it's a great opportunity to realize at this moment who we are and what we have to do, how we have to work; very important basic things in basketball. One more time, first twenty minutes we were so lose; our approach was horrible. Thinking that we have to score 50 points, not caring about defense, not sharing the ball, not having patience in offense at all. So we gave Astana an opportunity. Astana is a very good team with athleticism and patience in offense to get into the game and have a big opportunity in the end to win the game. Finally, we won and that is something we have to be happy about because every game is important, winning something no matter what we have to achieve. Honestly, I feel great now because at tomorrow's practice I will tell my players that it's a small team's approach how we played first twenty minutes”.
Photo