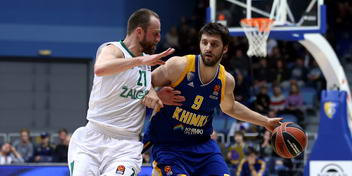 “Obviously, the experience played a big part. I think for us, a young and new team, these types of games at the beginning of the season are difficult, and we made too many mental mistakes to win this game on the road, giving Khimki too many opportunities, too many cheap points. This is it: we didn't follow the game plan at all”.

“I am satisfied for the win. It was a very important win. We had to protect our home court. We played against a very good team, Zalgiris. They play with energy, they put pressure on the ball fullcourt, and we had to manage this. But we didn't play well. I can say that it's normal because we're a complete new team. We have eight new players, a new coaching staff and we need some time to stick together, not to rush, and to manage to have patience in the game. We didn't have patience, and that's why our victory today was really tough, really difficult, but as I said, very important. We are happy we started the season with two home wins in the EuroLeague. We have to keep protecting our home court, we have one more home game next, but we need to play better”.

“Zalgiris is a fighting team that always fights till the end, even when it’s down. Tonight they proved it again, even trailing by 15 points. It’s a young and running team that scores many points; they didn’t score triples in the first half but did so in the second one. They made defensive pressure, forcing us to make a lot of turnovers. I’m happy for this win that it’s the second for us. In the end, we played wisely and didn’t allow them to foul or steal the ball. A well-deserved victory”.

“I think we just made the right places and right movements, as well as our rotation defensively. We moved the ball and had good one-on-one situations in the offense. Zalgiris is a tough team as they have some veteran players. They had some runs but we stayed consistent and locked down defensively. That allowed us to came out with a win. I love the environment at the arena. It’s always nice when fans come here to watch. Hopefully, we’ll have this all season”.

“I think my confidence is good just because of the fact that I put a lot of work in this summer. I just felt I had something to prove in my game no matter where I played this year, so that's all it goes to. And then my teammates are helping me a lot. They're hitting me anytime I set a screen and roll, and pretty much that's the reason why I'm getting these easy buckets. Of course, we're nowhere near to great chemistry yet. But they are helping me every step of the way, talking to me every second and I just feel the love here from my teammates, the whole staff and the organization, so that helps me a lot”.
Photo