BC Khimki made a huge run in the third quarter and defeated Crvena Zvezda Belgrade at home court — 85-78. Tomorrow our team flies to Piraeus, Greece to face Olympiacos. Tip off on Thursday, Oct. 26, 2017 at 21:15 msk. 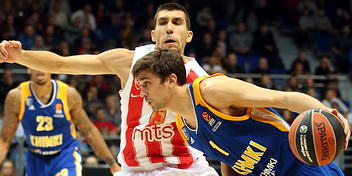 “Mostly, we were good in the first half, but played without concentration in the third quarter, maybe for five, six minutes, I don't know exactly. For this game, that is enough if you have Khimki against you. Maybe that was the key period for this game. Also, the second thing, which is very important in games like this, is concentration at shooting free throws and today we didn't have that. We have a much smaller budget than others, but showed we can play with everyone, especially when we play at home. Our chances are bigger at home, of course”.

“We talked in the locker room at halftime about our approach. We threw away 20 minutes in the first half, playing without patience, and we didn't stop anyone on defense. We needed to have a different approach, especially on defense. I think we managed to do this in the third quarter. We were much, much better on defense and found some good opportunities to score. Finally, we won easily, but as I said, our approach in the first 20 minutes was very bad for us. For me, it is not important [to play against Olympiacos on Thursday] because this was four years ago. I also played against Olympiacos with Barcelona last season, so whatever happens, happens. I am now focused on my team and we need to play much, much better if we want to win over there”.

“Like we said before the game in the preview, they came here to fight, of course. They are tough opponent and fight till the end. And we knew that. We didn’t start well defensively as they had open shots and made too easy baskets, using their moments. In the third quarter we started with a good run and showed our quality defensively. We showed we are a much better team. We didn’t start well defensively and when you allow somebody to get confidence, you’ll have a tough night. This is the EuroLeague where all the players have quality. We are 3-0 in the EuroLeague and we wanted that to defend our home court. Now we have road games and they will be tougher”.

“We just gotta find the way to start the game better as we are a really good team. We were focused, but for some reason in the first three games we just started out slow. It’s fine now because we won, but the schedule is gonna be tougher and something we have to change. We came back with James and Alexey as usual; other guys found their role. We have to come out better. I’m fine; it doesn’t matter for me [to start the game]. Coach wanted to protect me from early fouls, taking myself out of the game. Emotionally I was able to focus on what I need to do to help the team. I’m pretty sure that going to Belgrade will be a different story for me because playing in front of their fans will be more difficult. But tonight it was a normal game”.
Photo