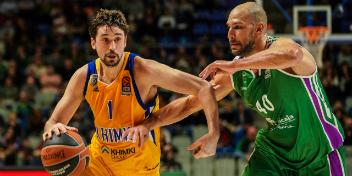 On Friday, February 2, 2018 BC Khimki will face Unicaja Malaga, Spain in a EuroLeague round 21 game. The game will be played at Mytishchi Arena. Tip-off at 20:00 msk. Don't miss!

Stefan Markovic played for Unicaja Malaga for two seasons. He played under Coach Plaza and was a teammate with Carlos Suarez and Mo Soulade during 2014/2015 and with Suarez, Alberto Diaz, Daniel Diez and Nemanja Nedovic in 2015/2016.

Markovic and Nedovic were teammates on the Serbian national team and won the silver medal at the 2016 Olympic Games.

Unicaja center James Augustine played four seasons for BC Khimki from 2012 to 2016. He helped the team win the 2015 EuroCup, together with Tyler Honeycutt, Sergey Monya and Egor Vyaltsev. He was also a teammate there with Marko Todorovic and Alexey Shved during the 2015/2016 season.

Unicaja’s Giorgi Shermadini played under current BC Khimki Coach Georgios Bartzokas at Olympiacos Piraeus in the second part of the 2012/2013 season. They won the EuroLeague together.

Shermadini and Malcolm Thomas were frontcourt mates at Maccabi Tel Aviv for the first part of 2012/2013 season.

“Unicaja is a team that has been playing with the same style for many years. They are an aggressive team that put a lot of pressure on the ball. At the same time, this is one of the best teams by pattern from coach Plaza on offensive rebounding. We need a team effort because we miss our first rebounder in Robinson, so we need everyone’s contribution at this situation. Generally, we expect an energy-type of game. [Nedovic’s injury] will influence them a lot. We are talking about their first scorer and leader in assisting. Also, Nedovic is a player who has personality and leadership. On the other hand, at this level everybody is ready to cover [his absence]. Everybody is motivated to show their quality because they will have much chance in playing time. If we see their backcourt, we can understand that there is no easy or bad player”.

“I expect a tough game. They are a good team that showed they could go away and win some tough road games. We need to show a better game than we did in Valencia. I think, the offensive rebounding is for sure one thing they do extremely well. Also, they have good shooters and outside players. But the main thing is offensive rebounding because they get many points after many offenses and we need to pay attention to it. Of course, losing such type of a player [like Nedovic], is a problem but they won’t come here and surrender. They will fight and try to win here”.
Share on FacebookShare on ВконтактеShare on TwitterShare on ОК