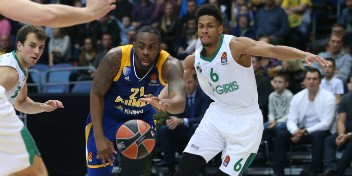 BC Khimki left to Kaunas, Lithuania to face Zalgiris on the road. The game will be played at Zalgirio Arena on Friday, February 9, 2018. Tip-off at 21:00 msk. Watch LIVE at Match TV, Match! Igra, Sportbox.ru and EuroLeague TV.

BC Khimki guard James Anderson played for Zalgiris during the 2014/2015 campaign, his firs EuroLeague season. Anderson was the competition’s seventh best scorer that season, averaging 14.5 per contest, and he was a teammate of three current Zalgiris players: Paulius Jankunas, Arturas Milaknis and Edgaras Ulanovas.

Paulius Jankunas has played his entire senior career with Zalgiris spare the 2009/2010 campaign, which he spent with BC Khimki.

BC Khimki center Marko Todorovic was a teammate of Zalgiris head coach Sarunas Jasikevicius at FC Barcelona during the 2012/2013 season. They helped Barcelona reach the EuroLeague Final Four.

Markovic and his Zalgiris counterpart Vasilije Micic have played together on the Serbian national team.

“As always, we are going [on the road] and try to win. This year Zalgiris has a very strong team. They play with a lot of energy, press the ball really hard and trap the ball as they always do. We need to get ready and be well prepared to play against them. There are some places in Europe, like Zalgirio Arena, where the audience is so warm but sometimes it’s a good motivation to play”.

“It’s going to be a tough challenge for us as this team is really playing well. That’s going to be one of the teams to compete for our spot. Early in the season they did a good job from game to game. Playing at that place is always a tough match in front of a passionate crowd of fans. So, we have to be really focused and down it to get a win there. Of course, it’s always special to play in front of your former fans and to see some of the guys I played with, as well as coach Sarunas. It’s going to be a special feeling but the most important thing is to go there trying to get a win”.
Share on FacebookShare on ВконтактеShare on TwitterShare on ОК