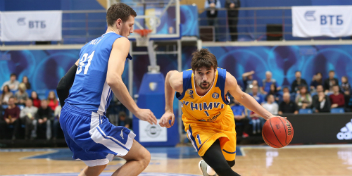 BC Khimki left to St Petersburg to face Zenit on the road. The game will be played at SK Yubileyniy on Thursday, February 15, 2018. Tip-off at 20:00 msk. Watch LIVE at Match! Nash Sport, Sportbox.ru and VTB UL website.

“The level of this game is pretty high. We are talking about the team full of talented players, especially offensively. We need to be very solid and consistent on defense controlling the rtythm of the game. Also, we need to execute with patience. In the firat game they scored almost 25 points on transition from our bad execution in offense. So, we need to avoid this. Of course, they have a lot of good players and add Griffin whom I know from Greece. He is a good plater, for sure. Their backcourt right now is full of talented players and good shooters. We need to be solid on both ends”.
Share on FacebookShare on ВконтактеShare on TwitterShare on ОК