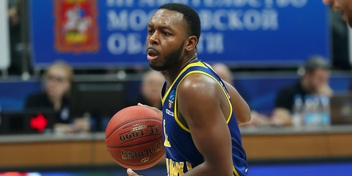 Jacob Pullen joined the team in the end of September but at his very first game for BC Khimki, he became one of the main players at the court. In a big interview to our website American native has spoken upon his various European career, work with coach Ivanovic, Georgian national team and shared his expectations about playing in Russia.

Jacob, how did the team welcome you? How do you like your new teammates?
“You know, so far it’s being good. We have a lot of practices and stuff. Moscow is a big city and one of the better places I’ve ever visited as I’ve played in smaller cities. As far as a team goes, my teammates are good and help me to learn the system and pick up on the things the coach likes. The coach and his staff are also good”.

Coach Dusko is demanding. What does he demand from you?
“He just wants me to take my shots. He doesn’t want me to be passive but mostly to be aggressive and play basketball the way I know how. But he also wants me to work hard, to run hard and also to treat my body right. He helps me with the things like that. It’s only have been a few weeks but so far it’s been good. As I said, Dusko allowed me to play, told me about some stuff I didn’t know how to play, to be aggressive on offense and look for my shots. It’s a good thing”.

How did you like your first game with Khimki when your triple decided the outcome?
“You know, I could have played better. The most important thing is winning regardless if I played good or bad. We won and everything became better. At the same time, I missed some easy shots and now it’s just the way to get into the rhythm. That was my first game and I didn’t play for a while. Hopefully, I’ll get into the rhythm and make better shots”.

Last season you played in Croatia for Cedevita Zagreb. How did you like you stay with that team?
“Zagreb was a nice city also. It’s a big city and my family enjoyed it. The club and the organization was a top one; the team was great. We had a good season and made it to the EuroLeague Top 16, which many people didn’t expect from us. We won the Croatian League and could have been better in the Adriatic League but overall I think it was a good season. Of course, we had some problems like injuries. In addition, it was a tough bracket in the Top 16 as we had plays against Fenerbahce, Laboral Kutxa and Lokomotiv who made it to the Final Four. We played against some good teams and had many close games. For the most part, we didn’t have the depth to compete with them. But I think that making it to the Top 16 was a good step for Cedevita”.

Looking through your career, you started in Italy after playing in college. Why did you decide to move to Europe?
“It was a lockout that season and I didn’t feel like it was necessary to play and see what’s gonna happen in the NBA. So, I chose to take the path to go and play basketball, which was the best way for me. Italy was a great time. It’s a great country: the food was great there and it was fun for me. It’s a great experience. Angelico Biella was a good team for me. My coach was understanding to me being a rookie. I learned the process of European basketball. I felt like he helped me to grow much that year”.

Then you moved to Hapoel Jerusalem. How did you like the life in Israel?
“Israel is also a nice place. It was warm and I felt difference from most European places in case of practices and stuff like that. You have more days off because of Shabbat and stuff like that. Overall, I felt like we had a good team. We were in the top of the Israeli League for the most part of that year. I had differences with the coach that season and I went back to Italy but for the most part Israel was a great place. The fans were great also”.

How did it happen you became an FC Barcelona player?
“I played really well in the end of the season in Italy. I felt like Barcelona really wanted me to score and needed me to score. Going there was another great situation and great experience for me. Playing in the EuroLeague Final Four, winning the Spanish League was perfect. It was a great season and it was a lot of fun”.

In that season in Barcelona, you played with Marko Todorovic.
“Yes, and like I said it was fun. We had a great team. Me and Marko, Ante Tomic, Joey Dorsey and Brad Oleson, Juan Carlos Navarro… There were many good players. Overall, being around those guys was a fun experience”.

We can’t but ask you about your game vs. Valladolid on March 8, 2014 when you made 12 triples and set All-ACB record. What did you eat before that game?
“I have no idea (laughs). I don’t remember a lot of stuff; I just remember the second half when the coach told me I had a chance to break the record. He wanted to see if I could do it. He ran a couple more places for me to see if I was really hot and I made some shots. My teammates did a good job. Marko [Todorovic] and other did some screens and got me open to score threes. A lot of credit to those guys”.

Last season Egor Vyaltsev also scored 12 triples here in the VTB United League.
“Yep, I’ve heard about it. It’s a good thing. If you have someone who can shoot the ball it’s hard for defense”.

Then you moved to CB Sevilla, also Spain.
“I was in Sevilla, Spain. We had a young team but I had some family things and needed to get back to the USA. We parted ways. After I handled my situation, I was able to go Brindisi, Italy, which was a good place for me. It was a good season and I felt like I played really well. The team also got really well and made it to the play-offs. We did well in the Italian Cup. I felt like it was another good step”.

What about your Georgian passport? How did you get your second citizenship?
“It was just an opportunity that came upon me when I had finished my first season in Europe. My agent told me that they were interested, so I took advantage of that news. It was a good idea and all those guys are really good friends of mine. I mean Zaza Pachulia, Tornike Shengelia, Viktor Sanikidze and other guys. I played with them for multiple summers and they became my good friends”.

How did you like playing at EuroBasket?
“It was a great opportunity. It was a big stage and many good teams from good countries”.

Now you are in Russia, your fifth country to play and to live in. How do you like it after couple of weeks?
“It’s been good so far. I’ve been with my teammates. There are some good restaurants here. The only bad thing is traffic but the other things go okay for me”.

What do you expect playing in the EuroCup and VTB United League?
“Just to compete. I think that we have the team that can compete and want to compete for the championship to get to the EuroLeague and in the VTB League also. That is the most important thing to go out every day and try to compete to win”.