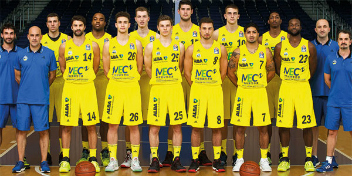 Today our team left Russia and headed to Germany to face ALBA Berlin in the 7Days EuroCup 2016/17 regular season third round game. It will be played at Mercedes-Benz Arena on Wednesday, October 26, 2016 at 21:00 msk. Watch LIVE at Match! Igra and Sportbox.ru.

"ALBA started very well this EuroCup campaign. They won in Bilbao last week and play really well in Berlin. They play with energy and quickly. However, every game we play for a win and try to do it better. I hope we can win it on the road now".

“We had a good game with Lokomotiv on Sunday. It was notable for Shved’s return and our fight, so now I hope that we will improve every game, week by week. We have seriously prepared for ALBA because we have to win and it doesn’t matter if this is an away game or home. ALBA has two wins so far and tops Group B. I think small details decide such games: either you play better defense or score tough shots, so the overall margin is not so large. However, the main point is defense. I mean if we play good defense, we’ll win games. Hopefully, we’ll change the situation in Berlin”.
Share on FacebookShare on ВконтактеShare on TwitterShare on ОК