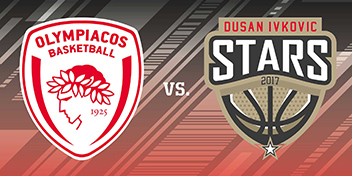 The game between Dusan Ivkovic Stars Team and Olympiacos Team (was played at the Peace and Friendship Stadium, Piraues, Greece) ended in favor of Ivkovic's squad (111-103). Stefan Markovic played under the guidance of legendary coach, as in Serbian national team (from 2008 to 2013).

Markovic said: “It was a great honor to be a part of this game. Mr. Ivkovic is a world basketball legend and I got a privilege to be coached by him”.

Tomorrow Markovic will join BC Khimki in Croatia and will be able to take part in 2017 Zadar Basketball Tournament.
Share on FacebookShare on ВконтактеShare on TwitterShare on ОК