BC Khimki vs. FC Barcelona Lassa: top game ahead 8 november 2018 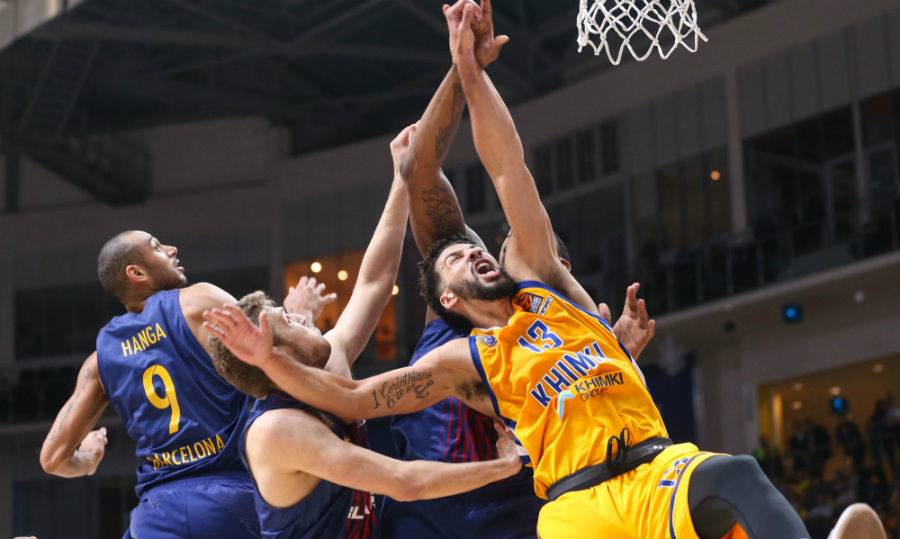 On Friday, November 9, 2018 BC Khimki will face FC Barcelona Lassa, Spain in a EuroLeague round 6 game. The game will be played at Mytishchi Arena. Tip-off at 20:00 msk. Don't miss!

BC Khimki guard Dee Bost and his Barcelona counterpart Kevin Pangos were teammates at Zalgiris Kaunas for the first part of last season.

BC Khimki head coach Georgios Bartzokas was the head coach of Barcelona during the 2016/2017 season. Victor Claver and Ante Tomic are the only players left on Barcelona roster from that season.

Victor Claver played for BC Khimki at the end of the 2014/2015 season, but was not registered and did not win the EuroCup. He was also a teammate of Sergey Monya and Egor Vyaltsev.

Claver not only played under Coach Bartzokas at Barcelona, but also at Lokomotiv Kuban Krasnodar during the 2015/2016 season. That season he was also a teammate of current Khimki forward Andrey Zubkov. They all helped Lokomotiv reach the EuroLeague Final Four.

BC Khimki guard Stefan Markovic and Barcelona forward Victor Claver were teammates at Valencia in the 2011/2012 season.

Markovic was also a teammate at Valencia with Pau Ribas in the 2012/2013 campaign.

“Barca is a team with a lot of quality and with one of the deepest benches in the EuroLeague. They have 15 high-level players. So, everyone understands how difficult is to play with them. They don’t have a fast pace and prefer playing five against five. They have two very good creators in Pangos and Heurtel and other guys who have good knowledge of basketball at any spot. They have great additions like Sigleton because except his quality in offense he can be a factor on defense. Also, they have Tomic who is the most skilled big man in Europe right now. His offense talent is notable. With the way they play, I mean set offense, Tomic has good numbers. We have to control the pace of the game and play faster than they want. Also, we need to play together like a team”.

“We have to play solid defense and try as hard as we can, sharing the ball well and taking care of any possession. We have to play as a team and do it hard because we want to win. Also, we need to play with passion, so it will be okay”.

khimkieuroleaguebarcelonabartzokasgill
Share on FacebookShare on ВконтактеShare on TwitterShare on ОК