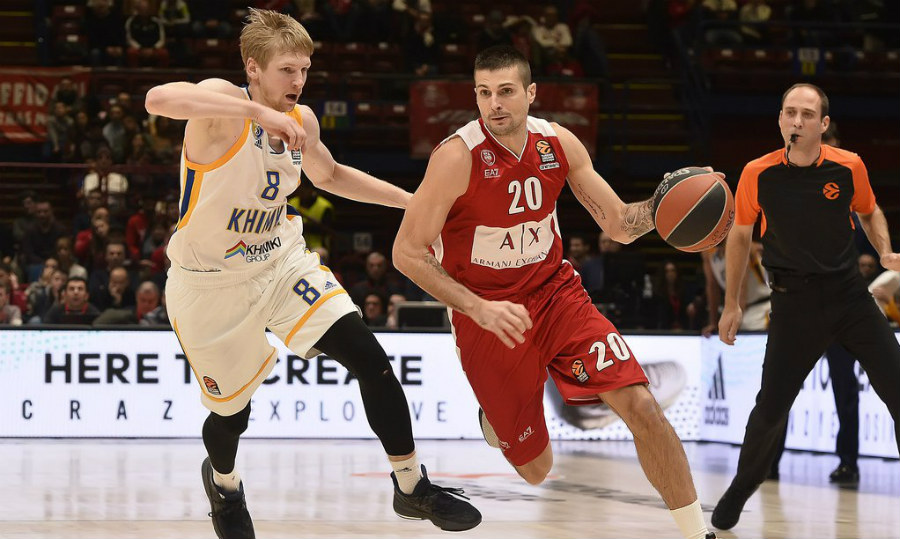 On Thursday, March 8, 2018 BC Khimki will face AX Armani Exchange Olimpia Milan, Italy in a EuroLeague round 25 game. The game will be played at Mytishchi Arena. Tip-off at 20:00 msk. Don't miss!

Charles Jenkins played for Milan in 2015/2016 season and was a teammate of two current Milan player: Andrea Cinciarini and Mantas Kalnietis.

Dmitry Sokolov and Andrew Goudelock were teammates at UNICS Kazan in the 2013/2014 season. They reached the EuroCup Finals together and Goudelock was named EuroCup MVP.

Sokolov and Milan guard Curtis Jerrells were teammates at UNICS in 2014/2015 season.

Milan’s Arturas Gudaitis was a teammate of BC Khimki’s James Anderson at Zalgiris Kaunas during the 2014/2015 season.

“This team is playing well. They scored 116 points in the last game in their domestic league, that means they are an offensive talented team. Obviously, we don’t have the same kind of motivation but as I always say, the EuroLeague is a spotlight where everybody wants to play well. We don’t expect anything but a demanding game. We are talking about a team who has players like Theodore, Goudelock, Jerrells who can kill you in the backcourt. At the same time, they are very athletic with big guys on the frontcourt. We need to approach this game in a proper way because we have to count just one game at a time, as I say”.

“I think it’s gonna be a tough game. Despite their record, they are still a very talented team and it’s hard to play with the teams who are not running for the playoffs because they literally play free and with no pressure. So, we have to be concerned about that and get better as a team. They are really good with Jordan Theodore who came back from the injury, as well as Andrew Goudelock who is healthy but didn’t play in the first game. Also, they added Kuzminskas, so we expect another tough EuroLeague game”.
Share on FacebookShare on ВконтактеShare on TwitterShare on ОК