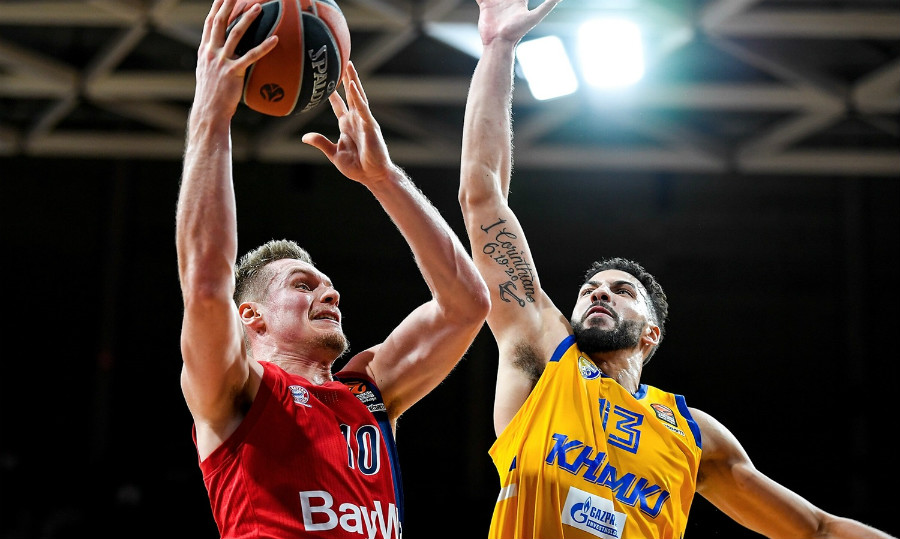 On Thursday, October 24, 2019 Khimki Moscow Region will face FC Bayern Munich, Germany in a EuroLeague round 4 game. The game will be played in Munich at Audi Dome. Tip-off at 21:30 msk.

FC Bayern Munich is a perfect 6-0 all-time against Khimki Moscow Region, including all of their four EuroLeague meetings between 2015 and last season.

FC Bayern guard Petteri Koponen played for Khimki from 2012 to 2016. He helped the team win the 2015 EuroCup together with Sergey Monia and Egor Vialtsev. He was also a teammate there of Alexey Shved during the 2015/2016 season.

Khimki's Stefan Jovic and Devin Booker arrived this summer from Bayern. Booker spent the last three seasons with Bayern, and Jovic played the last two. They played under Coach Dejan Radonjic and were teammates with much of the current Bayern roster in helping the team win back-to-back German League titles.

Jovic also played under Coach Radonjic at Crvena Zvezda mts Belgrade for three seasons, from 2014 to 2017.

Jovic and Bayern forward Vladimir Lucic have not only been teammates at Bayern but also with the Serbian national team.

“FC Bayern Munich is a very serious team with very strong defense and discipline. They changed their roster in the offseason, but the coach is the same and their style is clear for us. Some of last season's leaders, I mean Dedovic and Lucic, stayed in the team. Also, they signed a good center in Monroe. So, it will be tough for us, moreover we have never beaten FC Bayern yet and we want to change this balance. It will depend on our players. We still have problems with point guards, but at the same time Sergey Karasev plays better from game to game. We had good local game against Astana recently, and now we prepare for a serious battle against FC Bayern Munich”.

“We know they are a powerful team, going in we've got to respect that, but we want to win. We are practicing and preparing ourselves to go there, fight and try to win. They have real power in Greg Monroe. I played against him in the NBA. He is a skilled big man who can block shots and play post up, so I have to show the best that I can and use the help of my teammates to get stops on him”.

khimkibayernkurtinaitisevanseuroleague
Share on FacebookShare on ВконтактеShare on TwitterShare on ОК

Khimki ended road slide just in timeKhimki downs Milan, snaps road losing streakAstana vs Khimki HighlightsAstana came back from -17 but still lostJonas Jerebko and his Esports franchise, The RenegadesKhimki vs Nizhny Novgorod HighlightsKhimki beat Nizhny in clutchKhimki got the right balanceShved, Khimki hold off ZvezdaMaccabi rallies past Khimki in a thrillerAlexey Shved and Devin Booker vs UNICS (VIDEO)Evgeny Pashutin and Rimas Kurtinaitis will be All-Star Game head coaches...
2019
October